Created via fusing aspects of sculptural form, spatial sound, and interactive methods, HIVE is an art installation that explores the relationship between sound, space, body, and communication.

With HIVE, we intended to explore the idea of a sonic intelligence: learning, experiencing, reacting, and finally, “thinking” in sound. Can we model such a system? A system with a body whose morphology is based on picking up and sending sound signals, a system who can learn from its environment and evolve in its response, a pseudo ‘being’ that traces our sonic foot-print and projects our sonic reflection. 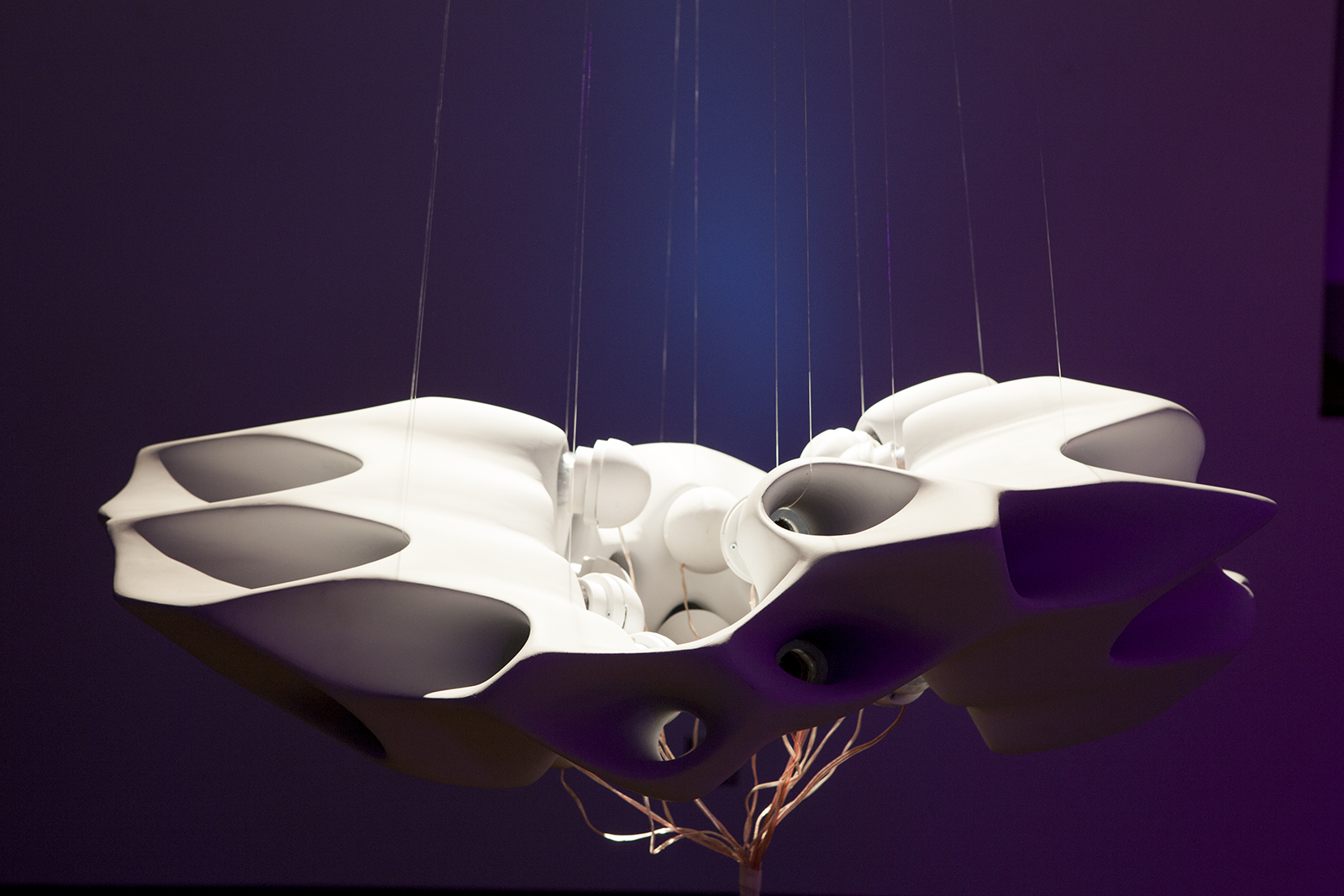 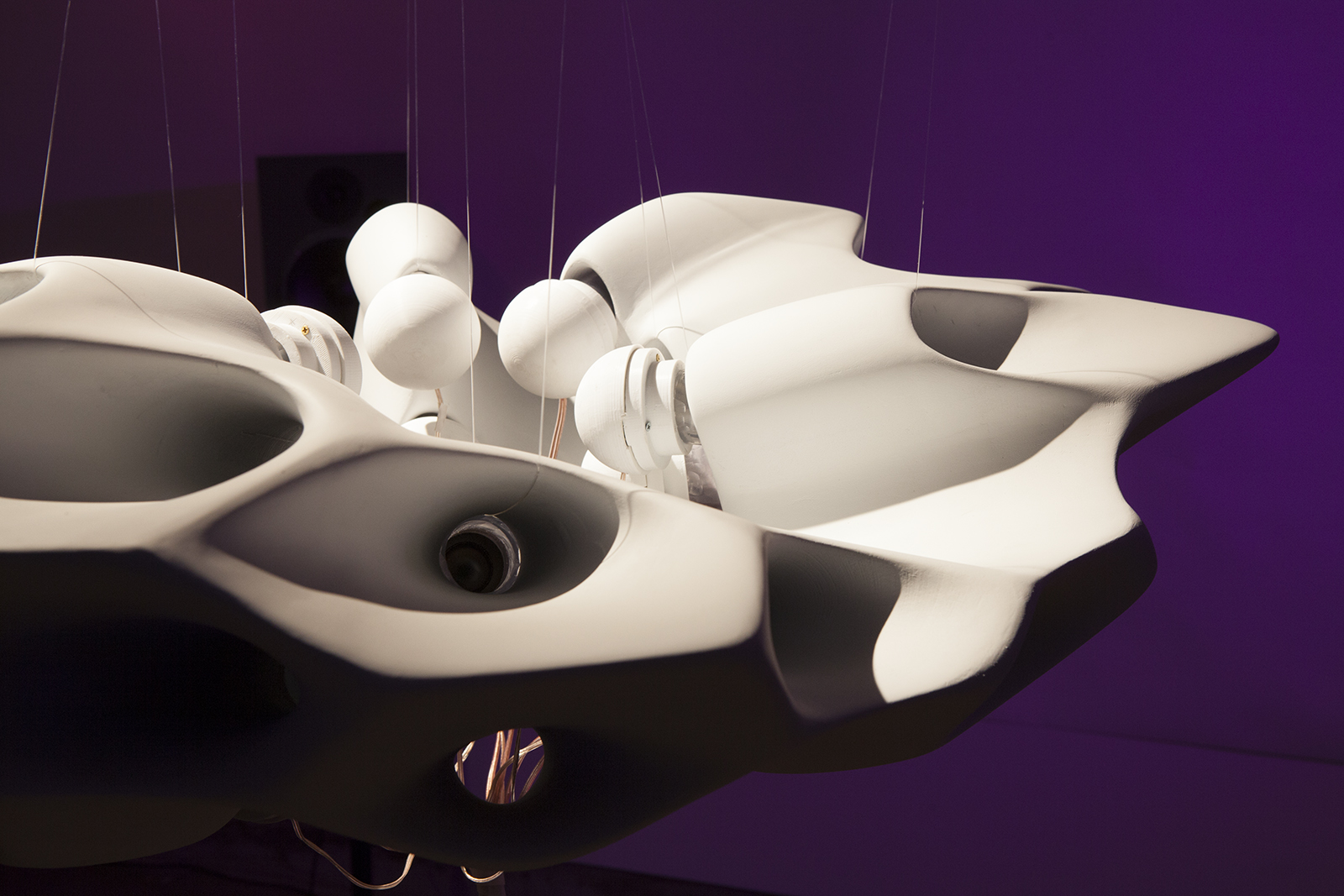 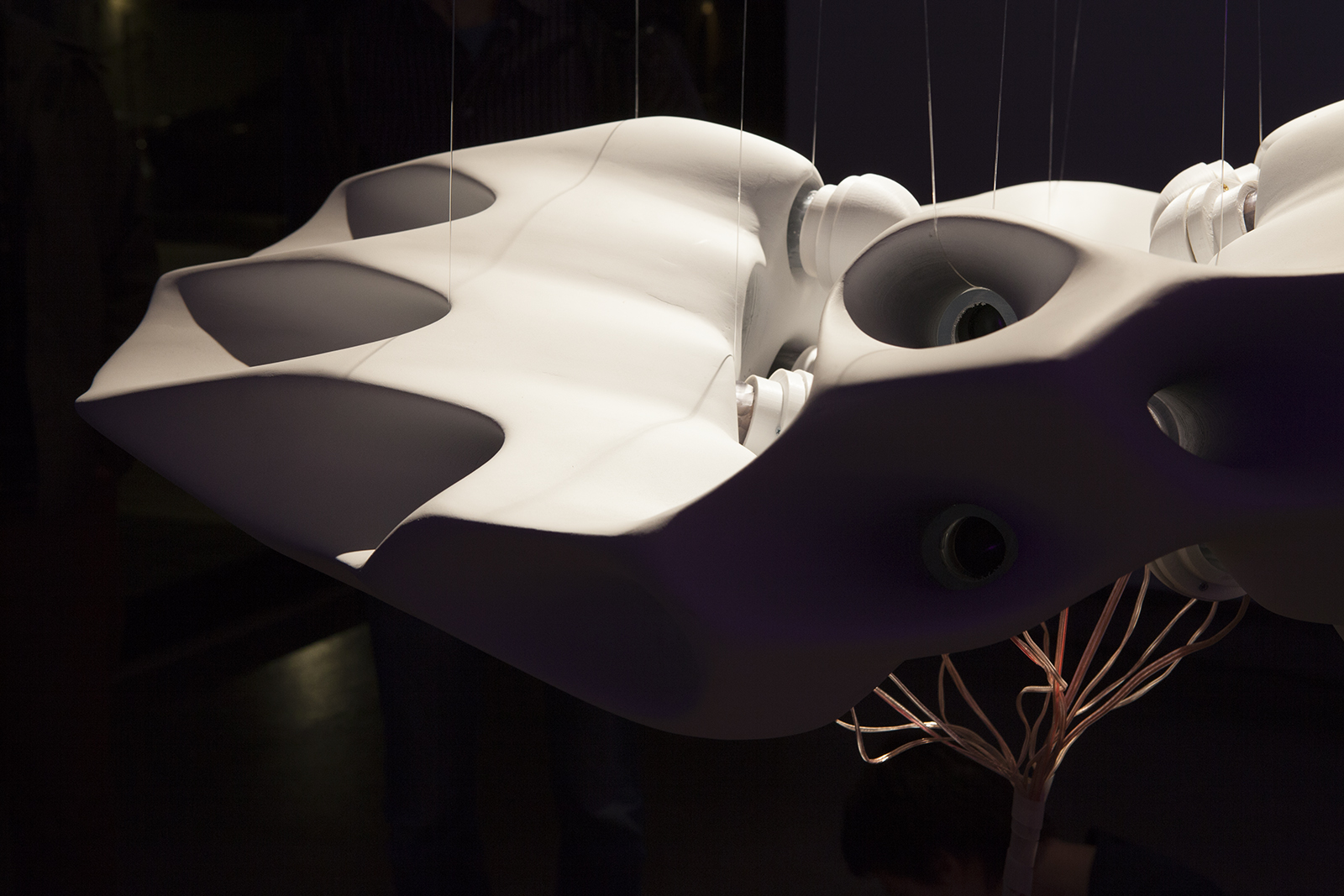 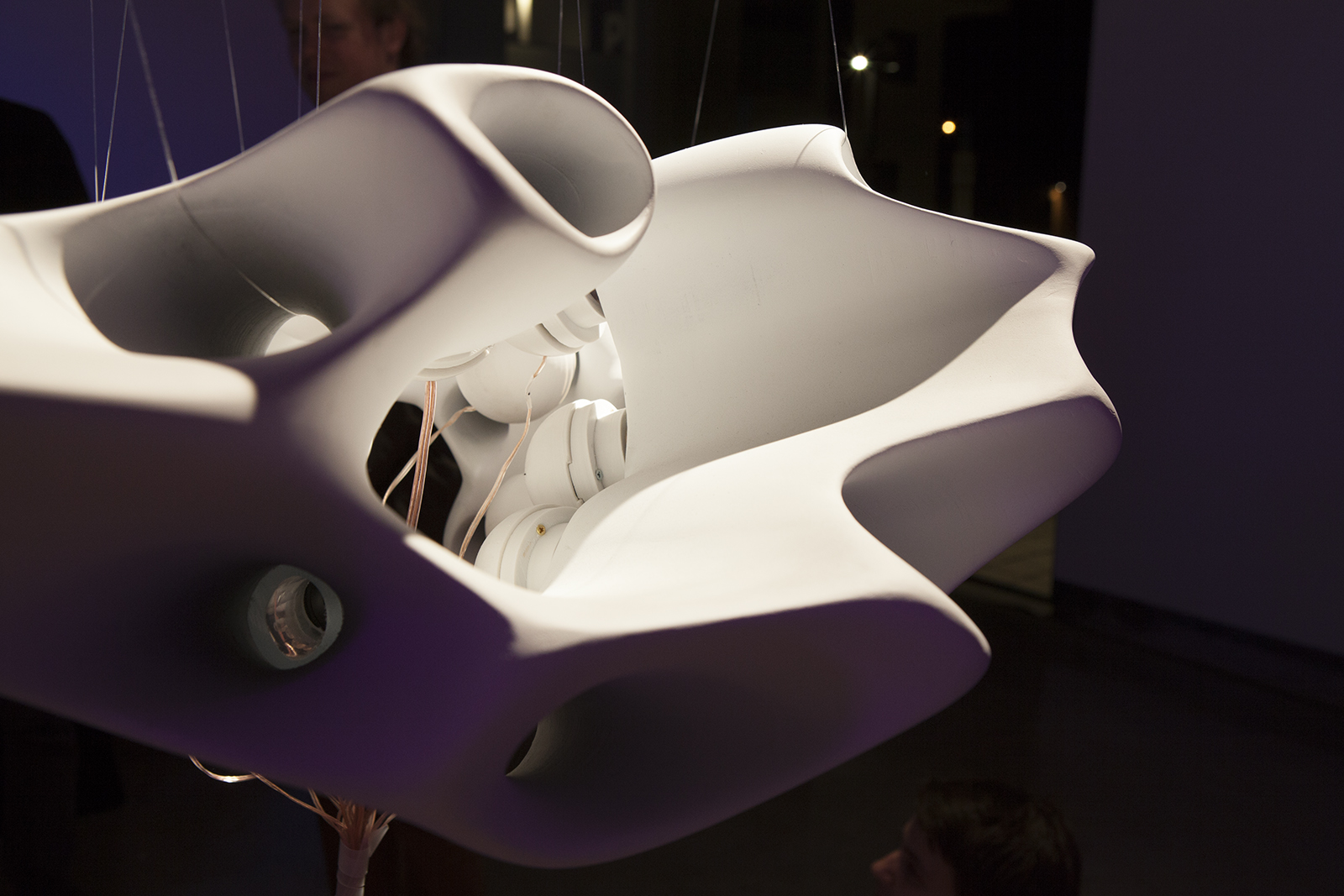 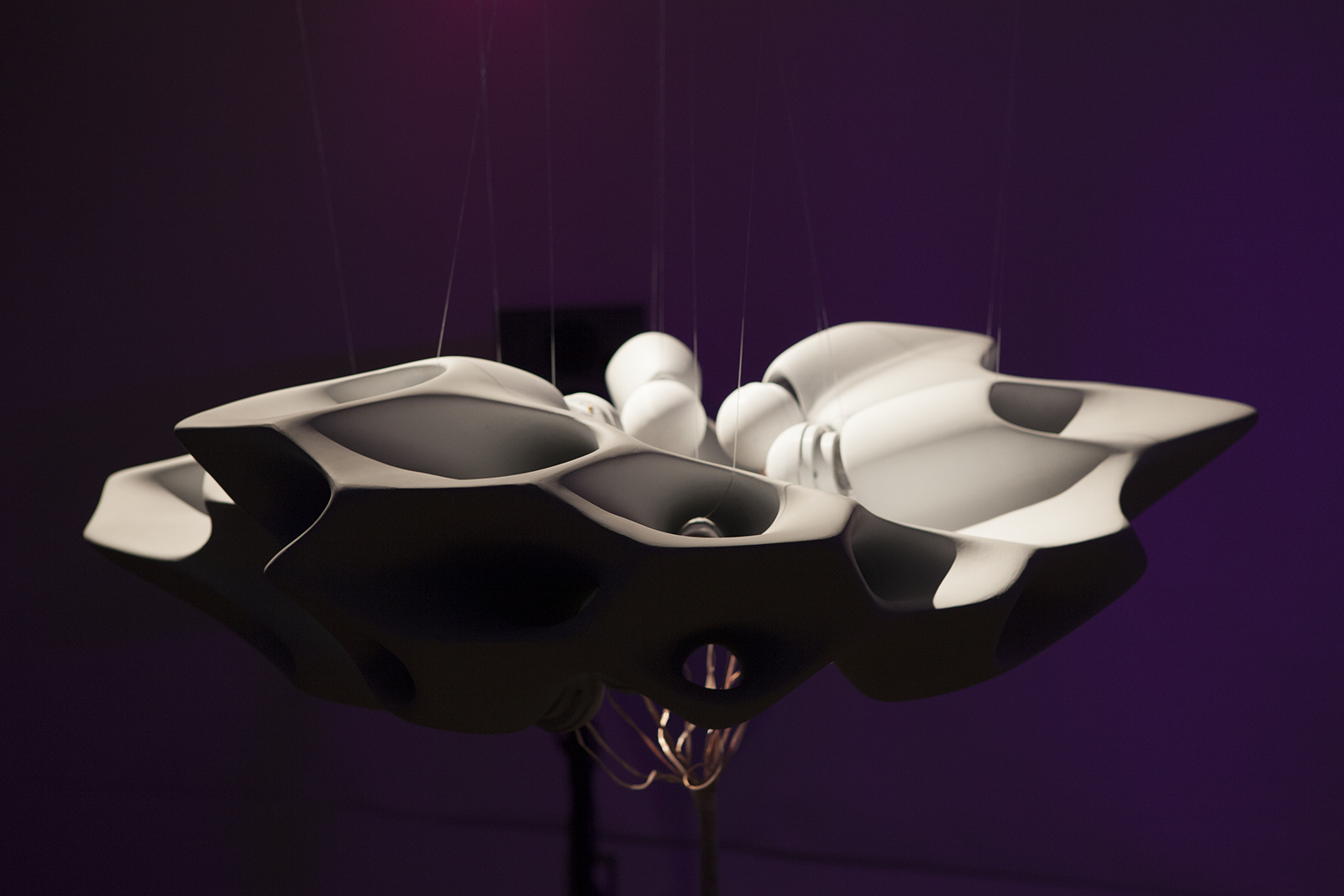 Inspired by Uexküll’s explorations, we algorithmically generated a model for an (imagined) organism with a physical body. We named this artificial organism that exists in purely acoustical umwelt as HIVE. HIVE’s only mode of sensing and responding to its environment is through sound, which is thoroughly reflected in its morphology. It is comprised of an exoskeleton whose internal structure of tightly packed horn-like tubes act as acoustical waveguides amplifying, filtering, and diffusing the sound from the 16 embedded transducers. In addition to this, several different types of sound-based sensors extend from this exoskeleton. It listens, senses distances and footsteps. We exist in its world through only acoustic signals. This is our sonic reflection, our sonic foot-print. Threatening or friendly, HIVE ‘learns’ from this sonic image of its environment and modulate its responses, reflexively creating a world of sound with its audience.

HIVE is comprised of an exoskeleton that houses the sound viscera, and several vibration sensors extending from it. The exoskeleton is algorithmically generated for the single purpose of embodying and projecting sound and has many versions due to the procedural nature of algorithmic modeling.

Morphologically, it is composed of an internal structure of tightly packed horn-like tubes. These tubes act as acoustical waveguides. They amplify, filter, and diffuse the sound from a multi-channel audio system that is attached to the exoskeleton. As a result, this artificial organism generates a 360˚ divergent sound field around itself as a device for livelihood, defense, and communication.

The sounds from the multi-channel audio system move and shift around the organism, forming many spatio-temporal choreographies. The organism, thus, comes alive with the ‘kinetic’ soundfield that is projected through an otherwise inanimate body.

A quadraphonic speaker setup placed on the periphery of the installation space emits its own soundfield that interacts with the soundfield that HIVE emits, creating a sonic foreground-background, figure-ground, organism-environment dichotomy. The interaction occurs via call-and-response-like sonic events between the ‘organism’ and its 'environment'.

Produced by Şölen Kıratlı and Akshay Cadambi, in collaboration with Re-Touch Lab.
Made possible with support from IHC and the Systemics Public Programming Fund
For more longform conceptual details, please visit my collaborator Şölen’s website here.